It was in 1413 in the City of Valencia and Saint Vincent Ferrer was preaching at the square known as Plaza del Mercado.  He suddenly stopped preaching and was visibly saddened as he shed a few tears. Some concerned parishioners standing nearby asked him:

The people around the saint were overwhelmed at the disturbing news and wanted to know more.

And turning words into action, he took out a handkerchief (“Mocador”) and threw it up into the air. Almost instantly, it gently flew down several neighbouring streets close to the square and gently slid into an open window of house close to Tapinería Street. There and then, the ill and starving family was found. It goes without saying that the citizens of Valencia were generous and opened their hearts. Those poor people were succoured.

The house where the festivity of the Handkerchief of Saint Vincent Ferrer (Mocadoret) is celebrated is in the same place where the prodigious event described herein took place centuries ago.

The Board of the Mocadoret Altar 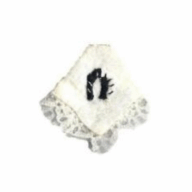 Install this Altar del Mocadoret on your iPhone

and then Add to Home Screen